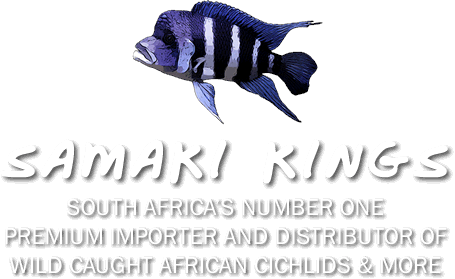 Contact Siv on +27 83 389 2369 via Phone or Whatsapp to confirm availability and make a booking. We ship country wide (South Africa) and World Wide.

Make sure not to miss out – join our Whatsapp group and subscribe to our newsletter to be notified about future shipments.

Some pics of the latest shipments

Welcome to Samaki Kings where we take pride in importing wild caught African Cichlids of the highest quality.

We are constantly expanding our operation and importing wild caught African cichlids from only the best suppliers.

Our ongoing mission is to supply you with high quality fish and provide you with an experience that exceeds your expectations.

Our goal is to maintain the highest standards in Cichlid care. Our aim is to keep providing as many different species to the avid hobbyist and those starting out in the hobby of African Cichlids. We hope to keep the dream of owning wild caught African Cichlids a constant reality.

I bought my first bunch of Tangs from Samaki Kings during November. Their friendliness and professionalism was only exceeded by the quality of their fish. I would buy from them again.
Dawie RoodtPretoria
My business with Samaki King's consists of purchasing fish from two shipments.
The fish arrived being in excellent condition and well adapted to aquarium conditions and nutrition. On both occasions feeding within an hour of arrival. The specimens were healthy, vigorous and undamaged. The packaging was very professional and arrived with no leakages.
Communication throughout was accurate and timeous regarding pricing and shipping. I would highly recommend Samaki King's as the fish are well looked after, not exorbitantly priced and 100% the species you ordered if available.
André du PreezGeorge
Hi thanks for the fish supplied by Samaki Kings. Excellent quality. Delivery was exceptionally cheapest I have ever paid .
NeilDurban
It is always difficult to find quality Tanganikans across most pet shops. I was introduced to Samaki Kings and have so far purchased twice from them over the last year or so. On both occasions I was extremely happy with the quality and overall health of their wild caught fish. They are well priced, professional and also kept me updated on my order, looking forward to ordering from them on their shipment.
JayJohannesburg
Hi Siv
The quality of the fish is unbelievable including the size of the fish I received . First time ordering from you guys , the order took a bit longer than expected but considering the lock down and travel restrictions, no complaints from me it was totally understandable Can’t wait to see what’s on the next order!
Regards, Kuben
KubenDurban
Hi Siv and Talha
Thanks a lot for the beautiful WC tropheus and fire fins what a pleasure it was to deal with guys who are enthusiastic about the hobby and the product they sell. Keeping us informed with videos of the divers, when fish arrived and even doing your own quarantine before shipments. Chats and calls after fish arrived advise great consumers services definitely my go to for any further WC from lake tang.. Keep up the good work guys
Customer for life.
LanceGeorge
Previous
Next

Neolamprologus mustax is a species of cichlid endemic to Lake Tanganyika. This species reaches a length of 9 centimetres. It can also be found in the aquarium trade. Individuals are yellow in color and thus resemble juveniles of another cichlid species…

The convict julie (Julidochromis regani) is a cichlid species in the subfamily Pseudocrenilabrinae family endemic to Lake Tanganyika. Hence it is found in Burundi, the Democratic Republic of the Congo, Tanzania, and Zambia.

Tropheus is a small genus of at least six species of cichlids endemic to Lake Tanganyika in East Africa. The genus is widespread across all regions of Lake Tanganyika..

Lake Tanganyika & The History of the Cichlid

Lake Tanganyika is an astounding natural wonder, holding 15% of the Earth’s available freshwater and stretching over 600kms up the center of Africa from Zambia to Burundi. But it is the life that has evolved here over the past 10 million years or so that really stands apart from anywhere else on the planet.

Thousands of unique species survive in Lake Tanganyika having evolved independently over the eons in isolation and into incredible arrays. But it is the divergence of a group of fish known as Cichlids ( Cichlidae ) that truly stand apart from life anywhere else.

Often called an inland sea, these group of fish are surprisingly reminiscent of tropical fish found on the reefs of the world’s oceans, despite Tanganyika never having been connected to the ocean. At somewhere around 250 species (and counting), the cichlids of Tanganyika are remarkable in their diversity, complexity of behavior, colour and breeding habits. Almost all are found nowhere else.